It has been a staple in the video game industry for generations now: roughly every five years, the major console manufacturers roll out new systems, packing graphics that are even more eye-popping and features we couldn’t have previously imagined. The core gaming world immediately goes crazy for early previews of next generation titles, scrutinizing every frame of released video. And the countdown begins for the next generation.

Not this time, though.

While it’s been five years since Microsoft unveiled the Xbox 360 (and four since the Wii and PlayStation 3debuted), the game industry is letting things ride, offering updates and new play techniques to existing consoles, but not making enormous financial bets on true next-generation machines. And, for the most part, everyone seems okay with that.

The lingering recession and rising game development costs are partially to blame for the lack of new machines. As game systems have matured, the cost of making triple-A games has soared. Tent pole titles now cost (on average) between $20 million and $40 million — and there are some extreme examples, like Rockstar Games’ blockbusters “Red Dead Redemption” and “GTA IV,” that have reportedly sailed past the $100 million mark.

Next-gen games will cost even more. With publishers struggling to achieve a profit in the current economy, no one is in a hurry to add to their expense sheet.

Console manufacturers are no different. Developing a new system is phenomenally expensive. Worse yet, Sony and Microsoft typically sell them at a loss for the first two or three years, making their money back on royalties from game software systems. (Nintendo has always sold its hardware for a profit, which is part of the reason the company has so much money in the bank.)

Currently, all three manufacturers have lowered their costs to a point where they make money on each console sale – and while hardware sales are slipping somewhat, they’re still relatively strong. Believe it or not, there are still some retailers who have trouble keeping the PS3 or Wii in stock.

So, with strong demand and lower costs, there’s no incentive for Microsoft, Sony or Nintendo to roll out a next-generation console at this point. But there’s another reason the next generation won’t emerge until 2013 or 2014, at least.

We’ve seen some graphically amazing games on the Xbox 360 and PS3 to date — and some wildly creative titles for the Wii — but no one in the industry truly believes they have come close to tapping the full potential of any machine.

Developers like to do that before moving on to the next system. Often, the defining games of a system come just before it is overshadowed by its successor. The PS2 favorite “God of War” hit stores just as rumbles about the PlayStation 3 were beginning to build. And smash shooter “Perfect Dark” was released for the N64 when many people were more curious about the forthcoming GameCube.

While the Wii isn’t the sales powerhouse it once was, the system still outsells the competition by a healthy margin each month. And Nintendo’s games have long retail lives, giving them a steady stream of income with fewer titles.

For the Xbox 360 and the PS3, the launch of Kinect and Move will attempt to lure the casual audience while giving core gamers party games they’re not embarrassed to play. (Granted, those titles are in short supply in the launch lineups.)

And since both companies are able to add new features to their systems via downloadable upgrades, users can get those previously unimaginable features without shelling out for a new system. For instance, no one thought they’d be able to stream Netflix through their game machine when these systems launched.

Make no mistake: While there have been some naysayers, a new generation of console systems will most definitely arrive sooner or later. Streaming cloud game services like OnLive are showing some potential, but won’t reach critical mass for many years. While no companies are talking directly about the next generation, there have been some hints from publishers that work is underway.

But it’s going to be a while before anyone outside of the industry gets a look at ’em. 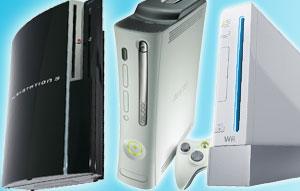