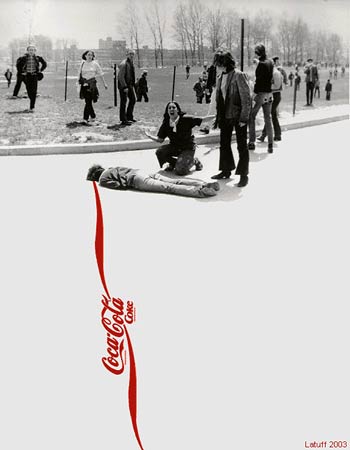 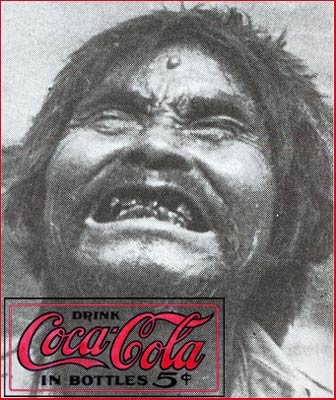 penicillin in the general population is thought to be
at least ten percent. Nearly 25 percent of these individuals will display
hives, angioedema, or anaphylaxis upon ingestion of penicillinS. hives and
anaphylactic symptoms have been traced to penicillin in milk, soft drinks,
and frozen dinners.”

“Many general dietary factors have been suggested as a cause of
osteoporosis, including: low calcium-high phosphorus intake, high-protein
diet, high-acid-ash diet, high salt intake, and trace mineral deficiencies.
It appears that increased soft drink consumption is a major factor that
contributes to osteoporosis. A deficiency of vitamin K leads to impaired
mineralization of bone. Boron deficiency may contribute greatly to
osteoporosis as well as to menopausal symptoms.”

“The United States ranks first among countries in soft drink consumption.
The per-capita consumption of soft drinks is in excess of 150 quarts per
year, or about three quarts per week.”

“Of the fifty-seven children who had low blood calcium levels, thirty-eight
(66.7 percent) drank more than four bottles (12 to 16 ounces per bottle) of
soft drinks per week, but only forty-eight (28 percent) of the 171 children
with normal serum calcium levels consumed as much soft drink S These results
more than support the contention that soft drink consumption leads to lower
calcium levels in children. This situation that ultimately leads to poor
bone mineralization, which explains the greater risk of broken bones in
children who consume soft drinks.”

“Soft drink consumption may be a major factor for osteoporosis as they are
high in phosphates but contain virtually no calcium. This leads to lower
calcium levels and higher phosphate levels in the blood. The United States
ranks first among countries for soft drink consumption with a per capita
consumption of approximately 15 ounces a day.”

James A Howenstine M.D.
A Physician’s Guide to Natural Health Products That Work

“In an interesting experiment the sugar from one soft drink was able to
damage the white blood cells’ ability to ingest and kill gonococcal bacteria
for seven hours.”

“Soft drinks also contain large quantities of phosphorus, which when
excreted pulls calcium out of the bones. Heavy users of soft drinks will
have osteoporosis along with their damaged arteries.”

James Duke PhD
The Green Pharmacy : The Ultimate Compendium Of Natural Remedies From The World’s Foremost Authority On Healing Herbs

“And watch out for cola soft drinks, which are very high in bone-dissolving
phosphorus.”

“Soft drinks are the single greatest source of caffeine in children’s
diets; a 12-ounce can of cola contains about 45 milligrams but the amounts
in more potent soft drinks can exceed 100 milligrams< a level approaching
that found in coffee.”

“Soft drinks have replaced milk in the diets of many American children as
well as adults. School purchases reflect such trends. From 1985 to 1997,
school districts decreased the amounts of milk they bought by nearly 30% and
increased their purchases of carbonated sodas.”

“The relationship between soft drink consumption and body weight is so
strong that researchers calculate that for each additional soda consumed,
the risk of obesity increases 1.6 times.”

“Adolescents who consume soft drinks display a risk of bone fractures three
to four-fold higher than those who do not.”

William Duffy
The doctor speaking in these dialogs is, Dr. McCay, the nutritionist at the
Naval Medical Research Institute.

“I was amazed to learn,” he testified, “that the beverage contained
substantial amounts of phosphoric acid. . . . At the Naval Medical Research
Institute, we put human teeth in a cola beverage and found they softened and
started to dissolve within a short periodS The acidity of cola beverages …
is about the same as vinegar. The sugar content masks the acidity, and
children little realize they are drinking this strange mixture of phosphoric
acid, sugar, caffeine, coloring, and flavoring matter.”

Carol Simontacchi
The Crazy Makers: How the Food Industry Is Destroying Our Brains and Harming Our Children

“One liter of an aspartame-sweetened beverage can produce about fifty-six
milligrams of methanol. When several of these beverages are consumed in a
short period of time (one day, perhaps), as much as two hundred fifty
milligrams of methanol are dumped into the bloodstream, or thirty-two times
the EPA limit.”

“What may happen, in the face of day-to-day, continuously high levels of
sodium in the diet and the bloodstream, is that we experience a type of
acute hypernatremia its integrity, but enough to keep our sodium potassium pump slightly
dysregulated and throw off the electrical system of the brainS. Americans
drink soft drinks that are often loaded with more sodium and which further
unbalance the mineral stores.”

Greg Critser
Fat Land : How Americans Became the Fattest People in the World

“A joint study by Harvard University and Boston Children’s Hospital
researchers in February 2001 concluded that such excess liquid calories
inhibited the ability of older children to compensate at mealtime, leading
to caloric imbalance and, in time, obesity.”

“One extra soft drink a day gave a child a 60 percent greater chance of
becoming obese. One could even link specific amounts of soda to specific
amounts of weight gain. Each daily drink added .18 points to a child’s body
mass index (BMI). This, the researchers noted, was regardless of what else
they ate or how much they exercised. “Consumption of sugar [high fructose
corn syrup]-sweetened drinks,” they concluded, “is associated with obesity
in children.”

“Saccharin is a 100-year-old non-nutritive, non-caloric sweetening agentS
its use has exploded over the last twenty years as a staple of the diet food
and drink craze. Its major current consumption is in diet pop by teenagers,
and not by diabetics and the obese. The public now firmly believes that
foods containing saccharin are effective in weight control, and has been
persuaded by the soft drink industry (through the Calorie Control Council)
that these benefits outweigh any possible health risks.”

“More than a dozen animal tests over the last thirty years have
demonstrated the carcinogenic effects of saccharin in the bladder and other
sites, particularly female reproductive organs, and in some instances at
doses as low as the equivalent of one to two bottles of diet pop daily.”

“The public board of inquiry concluded that experimental data “¹Sdo not
rule out an oncogenic effect of aspartame, and that, to the contrary, they
appear to suggest the possibility that aspartame, at least when administered
in the ‘huge’ quantities employed in the studies, may contribute to the
development of brain tumors.¹” Until these controversial findings on brain
cancer in experimental animals have been resolved, use this product
sparingly, if at all.”

Neal Barnard MD
Foods That Cause You to Lose Weight: : The Negative Calorie Effect

“Another advantage of avoiding sodas is that you will avoid the caffeine
that is in many of them. Caffeine is a weak diuretic that causes calcium
loss via the kidneys.”

“Recent research has linked soft drinks with childhood obesity< and an
estimated 200 school districts nationwide have contracts with soft drink
companies that give them exclusive rights to sell their products in
schools.”

“Children who drink large quantities of diet sodas containing aspartame are
particularly vulnerable to its dangerous side effects.”

“Twenty-one percent of the sugar in the American diet comes from soft
drinks! That’s more than just an unhealthy consumption of empty calories. It
is a dangerous overload of caffeine and potentially hazardous,
nutrient-depleting additives.”

“Soft drinks contain large amounts of phosphorus, which can throw off the
body’s calcium/phosphorus ratio (twice as much calcium as phosphorus),
decreasing calcium as well as reducing your body’s ability to use it.”

“For anyone over age 40, soft drinks can be especially hazardous because
the kidneys are less able to excrete excess phosphorus, causing depletion of
vital calcium.”

“Soft drinks can decrease the antibacterial action of penicillin and
ampicillin.”

“Diet sodas that are low in calories are high in sodium. Too much salt in
the diet may cause more calcium to be excreted in the urine and increase the
risk of osteoporosis.”

“Excessive consumption of soft drinks, which are high in phosphorus, can
also deplete you of calcium and increase your chances of osteoporosis.”

Jean Carper
Food: Your Miracle Medicine : How Food Can Prevent and Cure over 100
Symptoms and Problems

“Those consuming at least one cup of a caffeine-containing beverage per
day, such as coffee, tea or soft drinks, were more prone to PMS. And the
more caffeine they consumed, the more severe their PMS symptoms.”

“Phosphorus is found in most foods but soda pops, diet popsS contain
especially high amounts. The ideal dietary phosphorus-calcium ratio is about
1:1. The ratio in the average American diet is often greater than 2:1 and
sometimes even 4:1 or 5:1. At those levels, excess calcium is removed from
bone and eliminated, blood levels are reduced, and there is bone
demineralization. A diet high in phosphorus and low in calcium has been
shown to cause bone loss and increase tissue calcification.”

“Tooth loss, periodontal disease, and gingivitis can be problems,
especially with a high phosphorus intake, particularly from soft drinks. All
kinds of bone problems can occur with prolonged calcium deficiency, which
causes a decrease in bone mass. Rickets in children, osteomalacia (decreased
bone calcium) in adults, and osteoporosis (porous and fragile bones) can
occur when calcium is withdrawn from bones faster than it is deposited.
Fractures are more common with osteoporosis the United States are related to this prevalent nutritional deficiency
disease”

“High dietary phosphorus, as is found in a diet with meats, soft drinks,
and other convenience foods, can readily affect calcium metabolism.
Potential calcium deficiency symptoms may be more likely when the phosphorus
intake is very high. A low calcium-to-phosphorus ratio in the diet increases
the incidence of hypertension and the risk of colon-rectal cancer.”

Barnet Meltzer MD
Food Swings: Make the Life-Changing Connection Between the Foods You Eat and Your Emotional Health and Well-Being

“But soft drinks are far from soft. High in phosphorous and phosphoric
acid, they infiltrate bodily fluids and corrode stomach linings, upset the
alkaline-acid balance of the kidneys, and eat away at your liver like
Hannibal Lecter. Soft drinks also contain hidden caffeine, refined sugar,
and artificial chemicals.”

“Avoid processed foods and cola soft drinks; their phosphates can also
cause calcium loss and excretion.”

“A study on the relationship between caffeine and fertility found thatS
just one caffeinated soft drink per day was associated with a reduced
monthly chance of conception of 50 percent.”

“It should be noted here that soft drinks are the number one source of
phosphorus in the American diet todayS According to Dr. Steenblock, excess
phosphorus is one of the major contributing factors to the development of
osteoarthritis.”

“Absorption in primates is hastened considerably if the methanol is
ingested as free methanol as it occurs in soft drinks after the
decomposition of aspartame during storage or in other foods after being
heated. Regardless of whether the aspartame-derived methanol exists in food
in its free form or still esterified to phenylalanine, 10 percent of the
weight of aspartame intake of an individual will be absorbed by the
bloodstream as methanol within hours after consumption.”

“Sodium benzoate Sodium benzoate is used as a preservative (microbial
control) in foods, including soft drinks, fruit juices, margarine,
confections, pickles, and jams. Sodium preservatives add sodium to the diet
and reduce the availability of potassium. Some reported reactions to sodium
benzoate include recurring urticaria (rash), asthma, and eczema.”

Overview:
The health effects of soft drinks – quotes from the experts

Bad Side Effects of Coke

The first two ingredients listed on a can of Coca-Cola, or Coke, are water and high fructose corn syrup. Add to that some phosphoric acid, caffeine and caramel coloring, and you have a dark mixture of questionable nutritional content that can result in all sorts of negative side effects if consumed in high quantities.